Skip to content
I probably speak for everyone when I say, people value their privacy, but without living in a cave secluded from all of civilized society you are inevitably going to battle (or come to grips with) some invasion of privacy. Technology today makes it easier than ever for someone to spy on you. A little plant or clock in your hotel room or outlet at work may be the home to a camera. These hidden-in-plane-sight disguises make it easy for someone to place a spy camera device anywhere. These high-tech devices are surprisingly inexpensive and disturbingly simple to obtain through any online shops, no questions asked.Luckily, there are ways to find these devices. Understanding where people often place hidden cameras gives you little more control over your privacy.You might be feeling a little anxious or even a little upset and asking yourself:

Are Hidden Cameras Even Illegal?

Hidden cameras fall in a legal gray area depending on the location you record and the area you live in. Typically, hidden cameras on your private property, like a home or yard, are not an issue. However, when people add cameras to public places, legal problems arise.

Generally, if you are renting out a location, it is illegal to record guests without their consent. This legality carries over to places like hotels and Airbnb rentals. It gets a little complicated when the recorded subjects are employees rather than guests. Workplaces may sometimes have grounds to record you without permission depending on the state you reside in.

However, just because something is illegal does not mean everyone follows the rules. There are countless cases regarding guests who stumble upon hidden cameras in areas where they expected some level of privacy.

Performing a hidden camera sweep may save you a lot of grief later.

Where Do People Put Hidden Cameras

The whole point of a hidden camera is to remain hidden to catch subjects off guard. Hidden camera designers use several techniques to blend them into their surroundings expertly. While a hidden camera may be virtually anything, vendors mass produce some popular models to keep in mind during your hidden camera sweep. 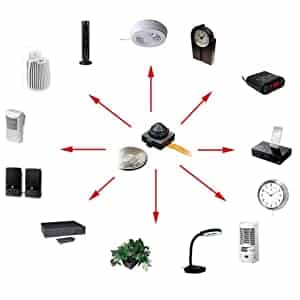 How to Detect Hidden Cameras

With so many potential hiding places for hidden cameras, starting your search may seem overwhelming. Luckily, there are a few different techniques used to find hidden cameras. Many of these don’t involve any fancy equipment. 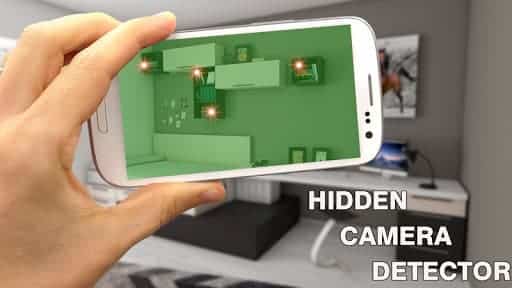 Observing your surroundings is the easiest way to spot cameras, when you know what to look for. There are some telltale signs that let you know that an object is a hidden camera.

Looking for an out-of-place spot on items is a great start. Many people notice an awkward dot on an outlet or a sudden shiny bump on a vase are actually hidden cameras. If something seems out of place check it out!

Purchasing an RF detector is an effective way to detect things you can’t see with your naked eye. They work by sensing radio waves often emitted from spying devices. The idea is that some hidden cameras transmit their feed to another device.

Most commercial devices transmit radio waves at a frequency of 500MHz to 6GHz. Most standard RF detectors scan beyond this range. Be sure to shut down any devices you have that may set off the RF detector before you scare yourself into thinking you found a camera. Such items include things like cellular devices, laptops, and anything that uses Bluetooth.

Although some hidden cameras transmit their feed, most cheap off the shelf (off amazon.com) use local storage, like an SD card. These devices do not need radio signals and won’t alert an RF detector of their presence. This lack of radio emission does not mean they’ll remain invisible from any sensor.

As the name suggests, a camera lens detector senses camera lenses. They search surfaces for light reflection characteristic of a recording camera lens. If the sensor goes off, investigate the suspicious areas for any hidden cameras.

Another invisible sign a hidden camera gives off his thermal energy. Electronics give off some heat when they’re running – think about how your laptop or phone overheats after you use it for too long. Thermal cameras may help uncover hidden “hot spots” that indicate an electronic device. While some items will naturally give off heat, you may want to investigate suspicious alerts like an overheating teddy bear or vase.

Smartphones are one of your cheapest and user friendly weapons against hidden cameras. Why? Because I don’t know anyone that doesn’t have one in their pocket nearly 24/7.  There is a wide selection of apps that help uncover hidden cameras. Go take a look at your app store. They also have some valuable features that don’t require any additional software or attachments.

Cameras require some illumination to record in complete darkness. The sensible solution most manufacturers use is infrared (IR) technology. The IR spectrum is not visible to the human eye. We need additional devices to uncover them. While it is entirely dark, use your front-facing camera (which does not have an IR filter) to look around your room. If you see any specks of light that you can’t see without your camera, this may be a spying device.

Why is a Camera Company Talking About Hidden Cameras?

While we believe you should not live in fear about everyone spying on you, it is reasonable to be cautious about potential hidden cameras. Hidden cameras have their place WHEN USED LEGALLY!  When the goal is to catch unsuspecting criminals hidden cameras are a great tool. However we believe the most effective way to deter criminal activity is to place security cameras in full view and place signs that alert people that there are security cameras in use.